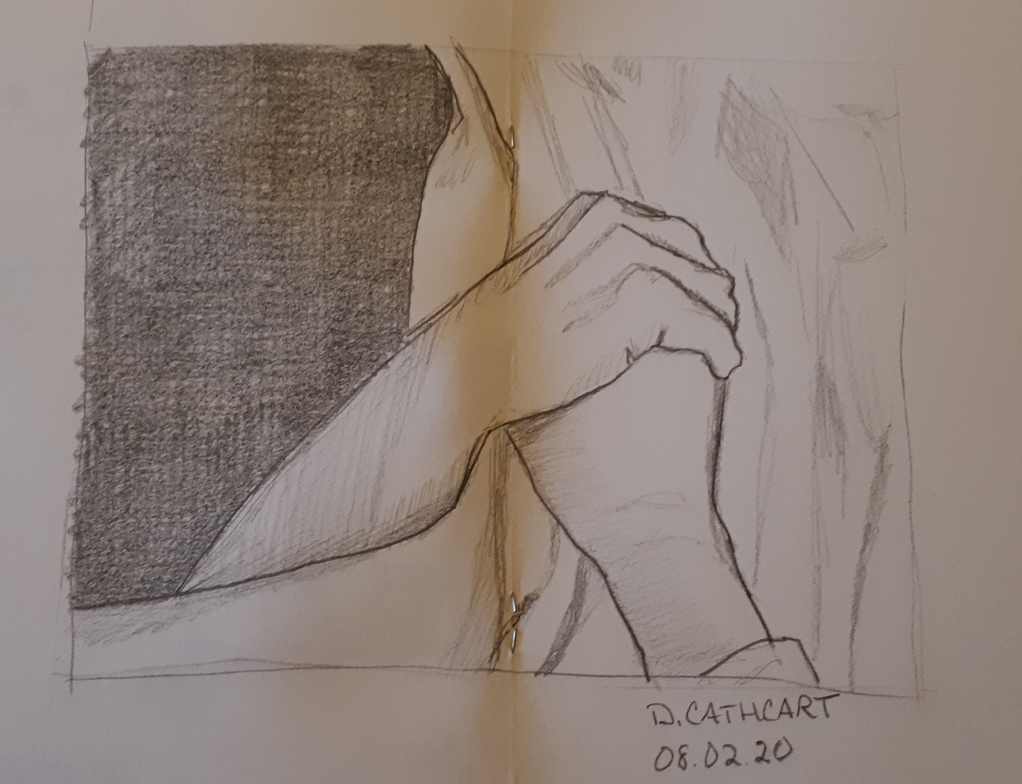 Unbind Him, graphite in sketchbook

A certain man was ill, Lazarus of Bethany.  He was the brother to Mary and Martha.  Mary and Martha sent a message to Jesus to let him know that Lazarus, Jesus’ friend, was very sick and might die.  Jesus knew that Lazarus' illness would lead to the Glory of God so he stayed where he was with his disciples for two more days.

Then the message came to Jesus that Lazarus had died.  And the disciples said, "Jesus, You're too late!"

When Jesus arrived in Bethany, he found that Lazarus had already been in the tomb four days.  There were many Jews, friends of Mary, Martha and Lazarus, who were visiting from Jerusalem, to be with Mary and Martha in their grief.

Martha went out to meet Jesus.  When she saw Jesus she said, "Jesus, You're too late!"

"If you had come sooner," she asserted, "My brother wouldn't have died.  But I know that God will give you whatever you ask for."

Jesus said to her, "Your brother will rise again."

"I know that he will rise again in the resurrection on the last day," Martha replied.

But Jesus said, "I am the resurrection and the life.  Those who believe in me, even though they die, will live, and everyone who lives and believes in me will never die.  Do you believe this?"

"Yes, Lord, I believe that you are the Messiah, the Son of God, the one coming into the world."

Martha went back to the house and sent her sister Mary to see Jesus who was waiting for her.  When Mary saw Jesus she said, "Jesus, you're too late!"

"Lord, if you had been here, my brother would not have died."

Jesus saw her weeping as well as her friends who had come with her.  He was deeply moved.  "Where have you lain him?" He asked.  And Jesus wept.

But the friends of Mary said, "Jesus, you're too late! You opened the eyes of the blind man; you could have kept Lazarus from dying."

Jesus came to the tomb where Lazarus had been lain.  A great stone was lying against it.  "Take away the stone," said Jesus.

But everyone said, "Jesus, you're too late!"

"Lord, already there is a stench.  He has been dead four days," said Martha.

"Did I not tell you that if you believed, you would see the glory of God?" said Jesus.

So they took away the stone as Jesus commanded.  And Jesus prayed, "Father, I thank you for having heard me.  I knew that you always hear me, but I have said this for the sake of the crowd standing here, so that they me believe that you sent me."  And with a loud voice he cried out, "Lazarus, come out!"

The dead man came out, his hands and feet bound with strips of cloth, and his face wrapped in a cloth.  "Unbind him and set him free," said Jesus.

Many who had come with Mary and Martha, saw what Jesus did and believed in him.

Jesus is never too late.