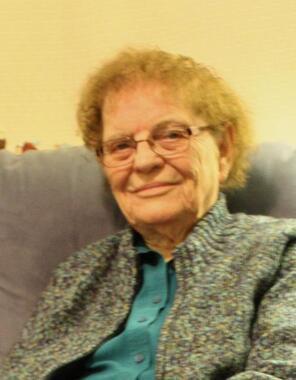 Memory from Trinity: Worshipping at Trinity, Beryl met a few ladies who became very good long-time friends.  Lavina S writes about how this came about. She says Beryl Taylor sat in front of her at church one Sunday.  Lavina leaned over and introduced herself and also introduced Peggy S. Up to that point Beryl said she had not made any connections with people at Trinity and was thinking of moving back to Edmonton. But here things changed.  Peggy and Lavina invited her to go to the Wilson Centre and join the seniors’ exercise class which she did, and the three of them remained good friends for years.  Beryl and Peggy became neighbours at the RJ Kent Residence and were a great support for each other. Once a month Beryl would invite a number of her friends for coffee at Waves and would pay for lemon cake for everybody. This included Marie C and Marj S from Trinity, as well as others from the exercise class.
Having Beryl with us at Trinity, with her sparkle and inclusion of others, has been an honour.