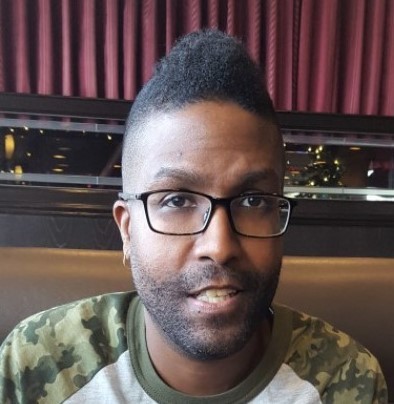 Celebration of Life for Nick Marshall: Please join the Marshall family at a service on Tuesday, May 17th at 11:00 am here at Trinity. Jennifer would appreciate an email j_marshall@shaw.ca to let them know how many people to expect. Please know, no more flowers or cards or gifts are necessary. Let's just get together and talk and laugh and share memories of Nick.

Memory from the Trinity Times, September 2021: Nick was born in Trinidad on May 17, 1976.   In January 1980, the family emigrated to Canada - Warren was six years old; Nick was three and a half.  The Marshalls quickly adapted to the Canadian way of life, participating in many group activities and sports.  Throughout elementary school, Nick was a talented tap dancer.  Sadly, he gave it up after performing a solo at the school Christmas concert in Grade 5, where he was heckled by a couple of students.  He stopped tap dancing, but he never stopped dancing!!  Like most parents, Jeff and Jennifer wanted to help their son with his learning experiences but Nick was a very determined learner and liked to take his time until he fully grasped new concepts.  So, one day he announced to his parents that he did not need “adult” help anymore; he preferred to figure things out for himself.  The brothers played basketball both in and out of school. Nick played soccer for years, with Dad Jeff as his soccer coach.  Both Warren and Nick were in the Royal Conservatory piano program. They both also played saxophone in a concert band and a jazz band in school.

Nick had many hobbies; he was passionate about photography, art, model cars, music, dancing and most especially cars…in particular Volkswagens!!  He worked on his photography skills by taking courses at  Langara College specializing in, among other styles, “experimental” photography.  After being the official photographer at two weddings, he decided weddings were not for him…too many bosses!!  Back to “experimental’! Nick attended Emily Carr School of Art and Design, where he earned a Bachelor of Fine Arts. Nick then attended UBC where he completed a teaching degree.  He received a special commendation after serving his teaching practicum. Warren commented that Nick never stopped learning new things, as he continued his education throughout his life.

He was an enthusiastic teacher, but after ten years as a substitute teacher, Nick accepted a position with the City of Burnaby in the Parks Department. He loved working outdoors.  A couple years ago, he was promoted to Acting Foreman with a crew. Nick was outgoing, thoughtful, observant, determined and had a great sense of humour.  He valued family and friends most in life.  He was persistent in his beliefs…for instance, he disapproved of his parent’s occasional visit to the casino and never let them forget it.  In fact, at one point, his parents became quite evasive in answering their son’s questions about where they had been that night.  He was quite a character!

Many of us at Trinity will miss Nick.  We watched him grow up through all his Sunday School years, and as a young man, joining with the family to usher at Christmas Eve services.  He enjoyed a happy and positive lifestyle…. God bless him and his family.