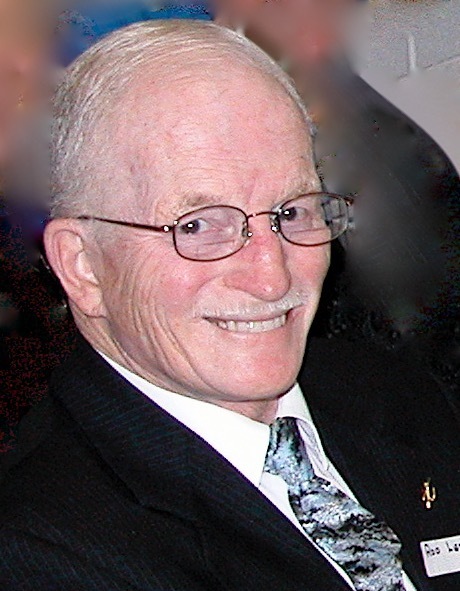 Memory from Joan Leston, from the Trinity Times March 2021: Rodney Ross Leston was born on March 28th, 1936 in Port Alberni on Vancouver Island but he spent his youth growing up in Vancouver. After graduating from Vancouver Technical High School, he went onto a 36-year career at B.C. Tel now known as Telus. After getting married he moved to Port Coquitlam in 1962 and began attending Trinity United, singing in the choir, and enjoying the couples club until 1968 when he moved to Port Moody.
After the breakup of his marriage, he returned to Trinity and rejoined the Choir and sang as a tenor
until his stroke in December 2012. Rod also enjoyed the fellowship of the TUMS group. [Trinity
United Men’s Group]. He loved baseball but because of his club feet could never play. That didn’t stop him, though, from becoming part of the game….he became a home plate umpire for minor and senior teams. He was well liked and respected and was invited to umpire at several provincial finals for the minor and senior levels. His lifelong dream of seeing a ball game at Dodger Stadium, watching his beloved Dodgers play, was fulfilled in April 2019 where he watched not one, but two games thanks to Ross Dunning who arranged the trip.
On retiring he took up the hobby lapidary which he thoroughly enjoyed and shared this love as an instructor at the Dogwood Senior Centre for 20 years. Rod attended Craft Fairs selling his beautiful jewelry and clocks. He later added rock carving to his talents and joined the Maple Ridge Lapidary Club where he was a member for many years. He carved some amazing items which he sold or gave as gifts to family members. Rod and Joan were married on February 28th, 1987 at Trinity and they enjoyed many years of traveling. They both volunteered for the Telephone Pioneers (now Telus Ambassadors) and Rod served four terms as president.
Rod was very supportive of his grandchildren. He attended most of their sports and dance events, enjoying their achievements.

Memory from Ross D: Born with physical challenges, he heard from everyone that he should not expect much during his life.  Rod set out to prove everyone wrong. Graduating from Vancouver Technical School in Vancouver, he went on to work with the Department of Highways in the interior and then to a long career with BC Tel.

But it was his time away from the business world that he showed the strength of character that would lead his way. He was a member of the Trinity United Church when it was in downtown Port Coquitlam, participating in the choir, Men’s Club and the couples group, was away for a few years and came back to the new Trinity United in 1987 where he participated in many of the activities around the church including the choir and again the men’s group until his passing in 2020.

Rod’s life was a success, but it was his life of traveling that he enjoyed.  The many years around BC and beyond in the motorhome with Joan and his traveling abroad.  It was this part of his life would talk about with everyone, most often with a smile or a laugh.

He often talked about his favourite city in the world, Arles, France.  He visited the city in 2007 and immediately fell in love with its Roman Coliseum.  His biggest desire, to climb the steep stairs and narrow walkways to the turrets at the top, just to look out over the city.  Such was his character, he did just that.  He showed this strength many times after, whether it was in Rome, adventuring in England and Iceland, or walking with the penguins in Argentina.

His true passion in life was baseball.  He had a very successful career as an umpire, and one of last trips was to Los Angeles, to watch those mighty Dodgers win 2 games and let him travel home with a smile.

Rod passed away with family and friends to support him and he will always be remembered for his strength, courage … and his smile.